Teaching a Cavoodle to Fetch

How to Teach a Puppy to Retrieve 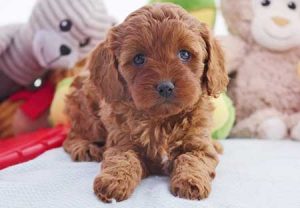 Part of being a responsible dog owner involves training your puppy to be well-behaved in all situations. We all know that puppies love to play and have fun, which is why some training exercises are a little more fun than others, although you can take steps to ensure that your puppy gets enjoyment in every training session. Playing fetch is right up there with the most fun things you can teach your dog to do, and while we have all seen dogs play this game, it does not come naturally to all Cavoodles and does need to be taught. Cavoodle breeders have not emphasized on Cavoodle puppies that are great retrievers like breeders of retrieving breeds (Such as Golden Retrievers.

We are now going to talk about the steps you need to follow to get your Cavoodle puppy to retrieve.

While some Cavoodle puppies will chase anything that you throw, others will barely give the thrown object a second glance, choosing instead to focus on you. Treats can help encourage the latter variety of dog to go after a toy that you have thrown. Alternatively, if your puppy has one specific toy that he plays with more than others, use that during the training. When you throw the toy, encourage him to go after it, lavishing him with praise even if he doesn’t bring it back. If you really want to motivate him to chase the toy, hold him back after the throw, whilst still encouraging him to go after it. Once you let go, he will take off flying. 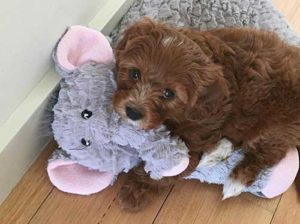 Once he gets in the habit of going after the toy, you need to think about getting him to retrieve it, which is where a second toy might come in handy. When he gets to the first toy, call his name and show him the second one, which you then throw behind you. He will most likely drop the first toy and chase after the second one, but what you are doing here is teaching him to return to you after the initial throw. Once he gets in the habit of returning to you, try calling him back when he still has the toy in his mouth. He will quickly learn that bringing it back means that you will throw it again, extending the game and his fun.

If your Cavoodle puppy is in the habit of picking up the toy and running off, try and use one that has a string or rope attached, as you can then start to pull it back once he gets it. He will follow the toy back, but do take the toy away from him at this point. Praise him, give him a treat, and throw the toy again. He will eventually start to bring it back without you needing to pull on the toy. If he won’t drop it when he returns it to you, drop a treat by his nose and issue a “drop it” command. He will drop the toy in favor of the treat, and will associate that command with letting the toy go so that the game of fetch can begin. Like all training, it takes time and patience to get this one right, but the rewards are certainly fun.